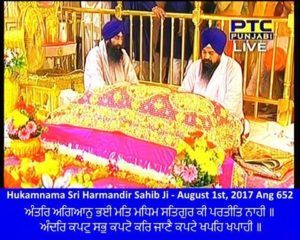 SHALOK, FOURTH MEHL:
He has spiritual ignorance within, and his intellect is dull and dim; he does not place his faith in the True Guru. He has deceit within himself, and so he sees deception in all others; through his deceptions, he is totally ruined. The True Guru’s Will does not enter into his consciousness, and so he wanders around, pursuing his own interests. If He grants His Grace, then Nanak is absorbed into the Word of the Shabad. || 1 || FOURTH MEHL: The self-willed manmukhs are engrossed in emotional attachment to Maya; in the love of duality, their minds are unsteady. Night and day, they are burning; day and night, they are totally ruined by their egotism. Within them, is the total pitch darkness of greed, and no one even approaches them. They themselves are miserable, and they never find peace; they are born, only to die, and die again. O Nanak, the True Lord God forgives those, who focus their consciousness on the Guru’s feet. || 2 || PAUREE: That Saint, that devotee, is acceptable, who is loved by God. Those beings are wise, who meditate on the Lord. They eat the food, the treasure of the Ambrosial Naam, the Name of the Lord. They apply the dust of the feet of the Saints to their foreheads. O Nanak, they are purified, bathing in the sacred shrine of the Lord. || 26 ||

Soohee, First Mehl, Sixth House:
One Universal Creator God. By The Grace Of The True Guru:
Bronze is bright and shiny, but when it is rubbed, its blackness appears. Washing it, its impurity is not removed, even if it is washed a hundred times. ||1|| They alone are my friends, who travel along with me; and in that place, where the accounts are called for, they appear standing with me. ||1||Pause|| 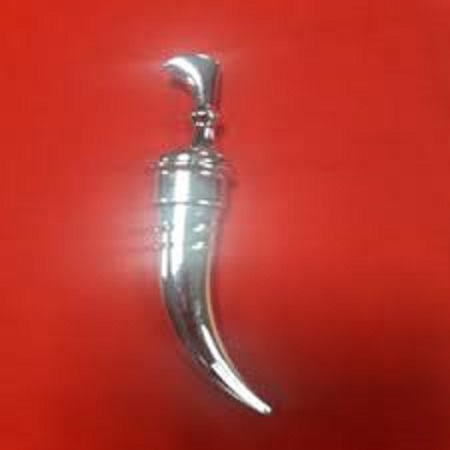 When all other means fail to curb tyranny, It is but lawful to take up the Sword.

The Sword-Like Spirit of the Sikh Gurus

A Sikh Wearing a Kirpan

Guru Nanak was born with a sword in his heart and soul.It was a sword, he used relentlessly against hypocrisy, cruelty and terror. He denounced religious thugs, and condemned ruthless kings and ministers as they had never been condemned before. Lamenting and protesting against Babur’s massacre, he wrote, “Terrible has been the slaughter, loud have been the cries of the sufferers. Did this not awaken pity in Thee, O Lord? If a strong power attacks another strong power, no one would grieve, none would complain. But when fierce tigers prey on helpless cattle, Thou Herdsman, must answer for it.”2

When Satta and Balwand, the Bards of the Sikh Gurus, describe the anointing ceremony of Guru Nanak’s successor, Guru Angad, they say, “Nanak placed the umbrella of sovereignty on the head of Angad. He has also graced the heart of Angad with the mighty sword (kharag) of divine wisdom. While yet living in this world, Guru Nanak installed his disciple Angad as his successor and Guru, and became the disciple of this successor.”3 Thus Guru Nanak passed on his Sword of Spirit to Guru Angad.

Humility is my spiked mace,

To be the dust under everyone’s feet

Is my Two-Edged Sword.

None of the wicked can withstand this weapon.

The perfect Guru has taught me this.

And with these weapons Guru Arjan became the first martyr of Indian history. He had already started giving military training to his son and successor, Hargobind.

The Sword of Guru Hargobind

When the Sixth Master, Guru Hargobind succeeded his father at the age of 11, he put on two swords. One, he said, was the “Sword of Spirituality”, (Piri) and the other was the “Sword of Political Sovereignty”, (Miri). The Sikhs were to uphold both Religious and Political Freedoms wherever they existed. One was utterly useless without the other. They were not merely to worship God and leave their political and religious freedom in the hands of others and live like slaves, but to fight for fundamental freedom and uphold their dignity and religious, political and cultural identity and integrity, no matter in which country they lived. Nor were the Sikhs supposed to indulge in any such political thinking and action which was devoid of moral and spiritual values. Religion without political freedom and dignity was abject slavery and politics without religion was organized barbarism.

For Guru Gobind Singh the Sword was symbol of God’s Power, Justice and Grace of Divine protection. Through this Invisible and Visible Sword, God protects the saints and the virtuous, and punishes the evil-doers, no matter in which garb evil operates in the world. Contrary to the traditions of ahirnsa (non-violence) carried to extremes of submission of tyranny, Guru Gobind Singh gave a new moral and spiritual direction and new Names of God, based on His Attributes as the Saviour of the weak and humble, and Destroyer and Annihilator of the wicked. Most of the Names of God in Indian tradition emerged out of the divine personality of dancing Krisna and pathetic lover Rama. The Names which he gave to God, centred around the Sanskrit word for Sword, like: Kharag (Braj Bhasa: Khag); As and its compound words As-dhuj, Asketu. The Persian words Tegh and Shamshir are also frequently used.

Sword (khag) that smites in a flash,

That scatters the armies of the wicked,

In the great battlefield.

Thou symbol of valour,

Thy brightness shineth forth.

The blaze of Thy splendour dazzles like the sun.

Sword, As, Thou art Protector of the saints,

Thou art the scourge of the wicked.

Scatterer of sinners, I take refuge in Thee.

Thus Guru Gobind Singh has clearly explained in his own words the meaning of the ‘Sword’ as he uses it. His Sword “scatters the wicked” has “the dazzling splendour of the sun”. It is “the Protector of the saints”, “scourge of the wicked”, “Refuge of seers and Heroes”. The Sword, the Eternal and Living Presence of God, Redeemer and Saviour of suffering humanity is ever victorious. The Sword (Tegh) in Sikh theosophy goes hand in hand with Degh (lit: Cauldron or Bowl), the symbol of undiminishing store of food or physical sustenance. Degh and Tegh, as Guru Gobind Singh uses, are the key word symbols of moral and spiritual supremacy of those, who consider God as the divine Giver and Protector.

Knowing that I am Thine,

Single out my enemies, Lord,

And destroy them one by one.

May there flourish in the world,

Degh: the Bowl of undiminishing Food,

Tegh: the Sword, the symbol of God’s Power and Justice.

In his letter to Aurangzeb which he wrote when Aurangzeb broke his oath on the Koran for peaceful settlement, Guru Gobind Singh vividly portrays the havoc wrought by the sword of the Mughal despot and the Protective grace of the Invisible Sword, the Presence of Almighty God. He writes:

Do not mercilessly and ruthlessly use your sword On the helpless people,

Because one day the Unseen Sword Will fall on you for your blood.

When all peaceful means fail to curb the oppressive tyranny of a totalitarian regime, it is righteous, says Guru Gobind Singh, to resort to the sword:

When all other means fail to curb tyranny,

It is but lawful to take up the sword.

Guru Gobind Singh also writes about the ‘Sword of Wisdom.’ “Gian-ki-badhani” which dispels all darkness and sweeps away all cowardice. In Krishan Avatar he gives his own philosophy, after writing the life of Lord Krisna, based on some hitherto unavailable version of Dasam Sikand of Bhagvatam, “Blessed is he in this world, who always has the Name of God on his lips, and in his heart is ever enshrined the spirit of true warriors. Knowing this body to be transient, he sails on the boat of glorifying God and crosses the stormy ocean of existence. He makes his body a mansion of patience, and within it he lights the blazing lamp of Divine Wisdom. Holding the Sword of Divine Knowledge (Gian-ki- badhanl) in his hands, he sweeps away all cowardice out of his inner life.”4

Professor Puran Singh rightly opines: “Every Sikh is to wear His Sword. Not his own. Kirpan is gift from the Guru. It is not an instrument of offence or defence; it is mind made intense by the love of the Guru. The Sikh is to have a sword-like mind. It is the visible sign of an intensely sensitive soul. It is but the symbol of the myriad personality of the Guru’s Sikh that knows no defeat, no disappointment, the personality that is unconquerable in its hope and in its spiritual radiance. Guru Gobind Singh says, “I will make one Sikh dominate over a million.” This realm is the kingdom of the illumined mind. The highly intensified and developed intellect naturally becomes overpowering so much so that it becomes fascinating and attractive in a physical sense. It gather its own moths like the intense flame of a night lamp. The presence of a great spiritual man overpowers millions. What is mind, if it has not the flash of the lightning and the sword? All conquests in the fields of life are mental and moral; physical conquests have meaning and significance, if they are over the forces of evil. He who wears the Guru’s Sword is a complete man, full grown in moral responsibility and spiritual disciplines.”5

The translation which I have given is by Sir Muhammed Iqbal. It is difficult to accept the translation given by Teja Singh-Ganda Singh in their book A Short History of the Sikhs. There is also no historical truth in Dr Garida Singh’s suggestion in his book Banda Bahadur that Banda was the author of this couplet. We find it in Dasam Granth, Sarb-Loh Granth, and Sainapati’s allusions in Gur Sobha. We find it in the letters of Mata Sahib Devi. We also find it written in Guru Gobind Singh’s own hands in a document preserved with Sodhi families of Anandpur.

Source – The Turban and the Sword of the Sikhs by Dr. Trilochan Singh

RAAG SORAT’H, THE WORD OF DEVOTEE RAVI DAAS JEE:
ONE UNIVERSAL CREATOR GOD. BY THE GRACE OF THE TRUE GURU:
If I am bound by the noose of emotional attachment, then I shall bind You, Lord, with the bonds of love. Go ahead and try to escape, Lord; I have escaped by worshipping and adoring You. || 1 || O Lord, You know my love for You. Now, what will You do? || 1 || Pause || A fish is caught, cut up, and cooked it in many different ways. Bit by bit, it is eaten, but still, it does not forget the water. || 2 || The Lord, our King, is father to no one, except those who love Him. The veil of emotional attachment has been cast over the entire world, but it does not bother the Lord’s devotee. || 3 || Says Ravi Daas, my devotion to the One Lord is increasing; now, who can I tell this to? That which brought me to worship and adore You — I am still suffering that pain. || 4 || 2 ||

*The Merciful Lord is the Savior of the Saints; their only support is to sing the Kirtan of the Lord’s Praises. One becomes immaculate and pure, by associating with the Saints, Nanak Ji, and taking the Protection of the Transcendent Lord. ||1|| The burning of the heart is not dispelled at all, by sandalwood paste, the moon, or the cold season. It only becomes cool, Nanak Ji, by chanting the Name of the Lord. ||2|| Pauree: Through the Protection and Support of the Lord’s lotus feet, all beings are saved. Hearing of the Glory of the Lord of the Universe, the mind becomes fearless. Nothing at all is lacking, when one gathers the wealth of the Naam. The Society of the Saints is obtained, by very good deeds. Twenty-four hours a day, meditate on the Lord, and listen continually to the Lord’s Praises. ||17||*